Veteran’s Healthcare should not be this difficult.

I have spent 4 hours today on the phone.  4 HOURS.

I spent that 4 hours trying to figure out something as simple as the correct location of my Tuesday Capsule appointment, of all things.

All I needed was an address.Veteran’s health care should not be this difficult.

I received my approval letter for my Capsule, but it shows a different address than where I had requested, and confirmed, I was going on Tuesday.  What does that mean?

I have called 22 DIFFERENT phone numbers today, some multiple times, trying to speak to a person, any person, about which location I would be seen at. 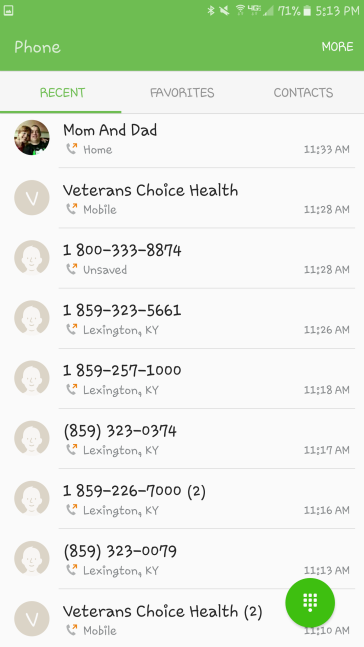 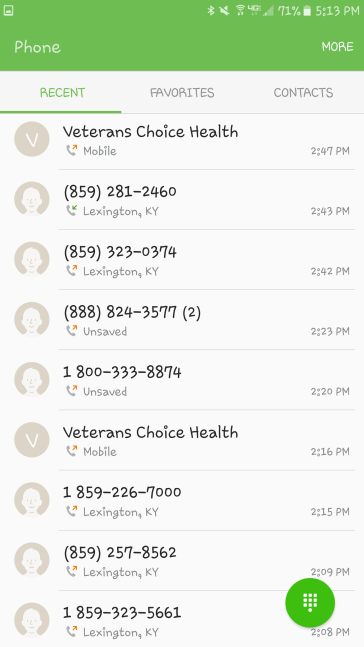 I had specifically requested Good Samaritan because I have had the Capsule Endoscopy done there before. (See My Crohn’s Journey)  But, my paperwork from the VA shows KY Clinic as the location for the procedure.

Both locations are ‘linked’ through their online systems, but neither place could ‘see’ my appointment when I called because the Capsule is considered a ‘procedure’, even though there is not a procedure happening other than me swallowing that damn pill-camera.  I was told to leave a voice message with scheduling, and that they would return my call, within 2-3 business days.

This wasn’t going to work.

So then I try to call the VA Choice Program since this is the program I used to get this appointment scheduled.  Surprisingly, they don’t offer weekend help to patients.  After listening to their automated system over and over and over, I had to call back and pretend to be a doctor, rather than a patient, just to speak to a real life person and try to explain my case to them.

The nurse with the VA Choice Program could not see anything in her online system, other than my own personal notes of when I called previously to inform my doctor about the appointment since I pretty much made it myself.  There was not even information in her system about the appointment itself, which is baffling considering it is 3 days away and provided through their own programs?  She couldn’t help me, but she gave me a number for a regional office, and maybe they could see something she wasn’t.

How can the VA approve the ‘procedure’, and then they don’t have any information of it in their systems? All I wanted to know was the location? Am I right? Is it at Good Sam, like I requested? Am I wrong? Is it at the KY Clinic for some reason? I don’t care where it is happening, I just want to know the correct place to go. It’s that easy.

To make matters worse, both Good Sam, the VA, and the choice program are ‘closed’ for the weekend, but would be available during office hours. This would be okay if Monday wasn’t a holiday and if my appointment wasn’t at 6:30 a.m. on Tuesday, when all offices are still considered ‘closed’. I could call the VA that day, but they would not even be open until 10 a.m. on my time. This couldn’t have been worse timing.  So we hung up, and I was going to try another number.

The Veterans Choice Program nurse immediately called me back, because somehow she could see something now, that she couldn’t see a moment ago?

She called to inform me that my appointment WAS at KY Clinic, because if that’s what my letter stated, then that’s where it had to be.

Everything on the paperwork was right for Good Samaritan, except location, but the nurse was adamant that I should trust the paperwork, and go to the Ky Clinic for my appointment, but I wasn’t convinced.  I had MADE this appointment.  I know what I had said, I know when and where I requested.  Something was just ‘wrong’ on the paperwork, it had to be. 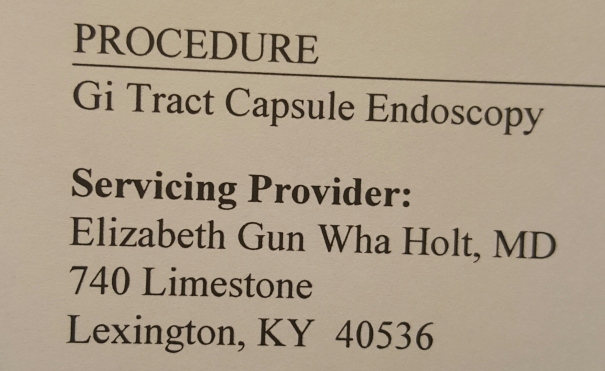 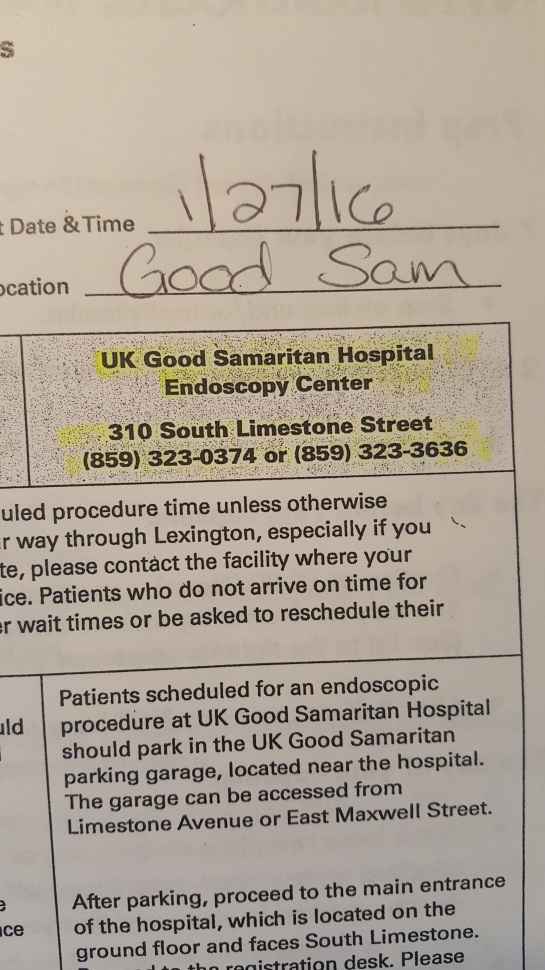 In a last effort attempt, I called the UK Hospital itself, with their main hospital number listed to call for patient room directories.  All other numbers and nurses had failed there, but I had to see if anyone there could look further into my patient records and give me the address for Tuesday.  It should not be this hard to find out the correct location. I know where I was told, I know where I chose, and I know where the paperwork says. Which place is correct?!

In a matter of seconds, the nurse at this number confirmed what I had thought correct this entire time: my appointment IS at Good Samaritan, not KY Clinic. Now, why couldn’t any other person see this information?! It is beyond me.

I was also told, however, that I was considered a ‘no show’ for my appointment with Ky Clinic on June 24, even though I did not have an appointment that day. I had made sure to call and let the nurse know I had been double booked for my ultrasound through the Choice Program, with an appointment at Ky and Georgetown both confirmed. Georgetown yes, Ky Clinic no. I had made sure their hospital knew that, but I guess the ‘note’ I left was never entered.

I had literally discussed how hard these appointments were to get and scheduled correctly last week:
“The Veteran’s Choice Program had me double booked for my ultrasound, one for Good Sam, the other for Georgetown, and that was a mess, to get the right location on the right date that I had originally scheduled. I don’t understand their systems. No one is ever on the same page, and paperwork gets lost in their systems. (The VCP allows me to see doctor’s outside the VA, often allowing your appointments to be sooner than what the VA could offer” – from Scheduling, Scans, Samples.

I swear sometimes these nurses agree with you, just to get you off of the phone, regardless of how it will affect your care.  After so many ‘no shows’, places can refuse care, and the VA is definitely one of them.  After so many ‘no shows’, the VA can refuse to set you up with any more outside appointments, forcing you to wait to be seen by the VA and only the VA, even if it means waiting for 6+months for care.  After a ‘no show’, the VA can refuse to approve my care for certain problems or locations, because these appointments are so hard to make.

So, now I get to call and try to ‘fix’ that ‘no show’ status on my account next week, so it doesn’t hurt my patient care in the future.

By not entering my note, the nurse causes me to look like the asshole or unappreciative patient.  Clearly, I care, or else I wouldn’t be adamant about knowing EVERYTHING about EVERY appointment I have, and I wouldn’t be stressing over dates, locations, and procedures the way I do.  But that’s not what the doctor or facility sees. They only see that a patient has ‘no showed’ them, and I will not be that person.

By not entering my cancellation, I am made to look as if this appointment wasn’t important enough to me for me to call, to reschedule or to cancel. By not entering my note, another person could have taken my place that day, and they didn’t get that chance. When I told the nurse about the mix-up, I even mentioned that she could give away the appointment to someone who needed it, and she laughed.

I rant and rant (as you can tell) about the VA and my health journey, but only because I feel it is not being handled correctly, and people need to know about how difficult it is.

I shouldn’t have to call 22 different numbers trying to reach a person.

I shouldn’t have to call 22 different numbers trying to reach someone other than automated voice messages.

I shouldn’t have to call 22 different numbers to find out an address for an appointment already confirmed.

I shouldn’t have to call 22 numbers because the clinic or health service is ‘closed’ for the weekend.

I shouldn’t have to call 22 different numbers because the system won’t show my information when I have confirmed my identity in every way possible.

Veteran’s health care should not be this stressful.

Veteran’s health care should not be this unprepared.

Veteran’s health care should not be this disorganized.

Veteran’s health care should not be this lacking.

Veteran’s health care should not be this unavailable.

Veteran’s health care should not be this difficult, especially just to find out an address.

I hope you all have a good 4th of July weekend, and I will see you next Friday.

For more information about infertility and the VA, please visit Resolve &VA.Gov

So Your Sayin’ There’s A Chance?